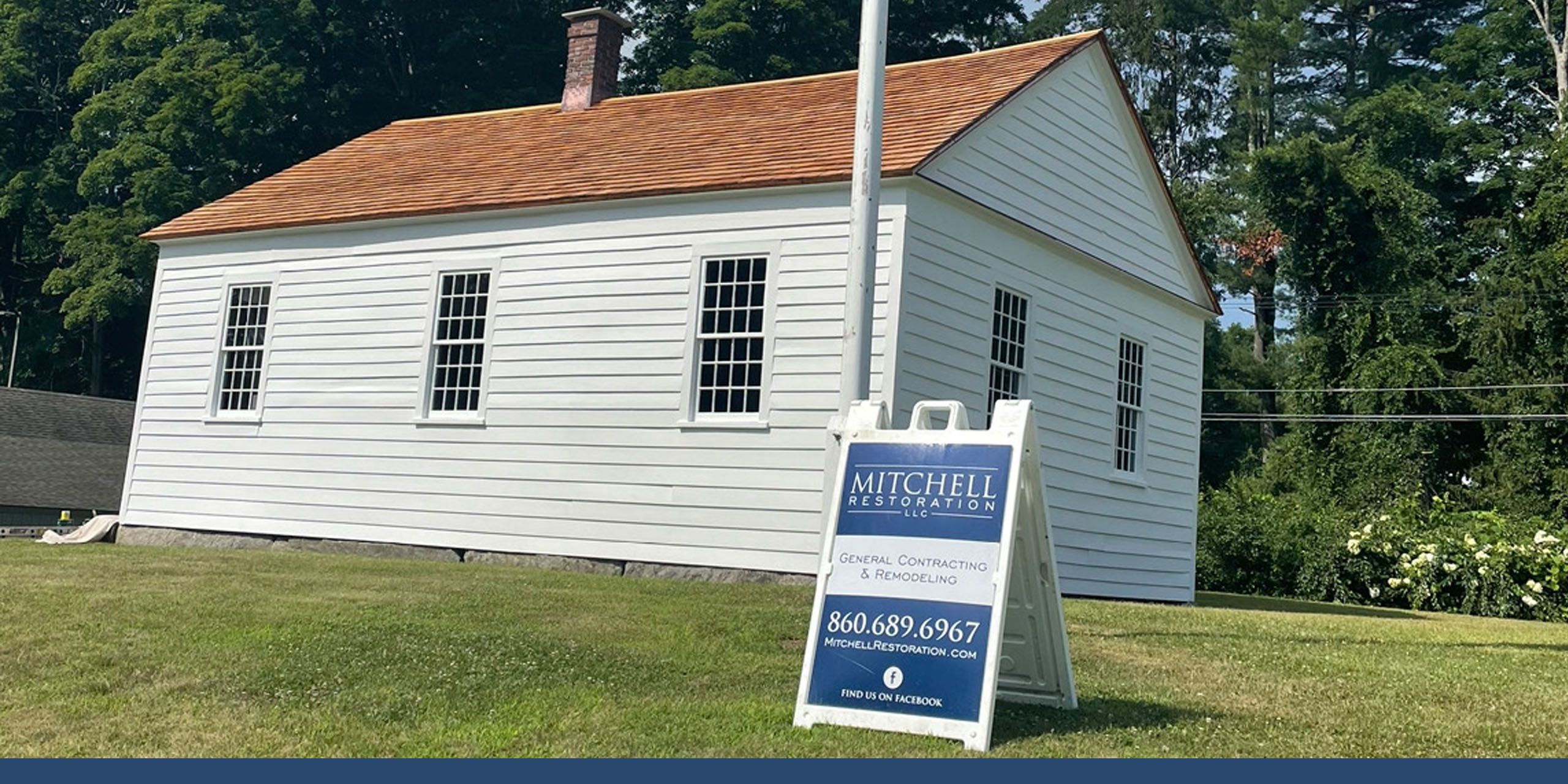 The First District School of Harwinton, CT, made a significant contribution to the development of the community. It was Harwinton, CT’s first and original schoolhouse, where students were taught and honed to be responsible and intellectual members of their community. It also provided countless opportunities to the locals.

Harwinton’s First District School is now considered a historic structure because of its historical value for the residents. It served generations of the community from 1840 until 1948 when the people of Harwinton decided to change their one-room schools to integrated ones.

It endured wear and tear from various elements for a very long time. However, it went through several renovations and relocations from the date it was built until today.

The Lions Club relocated the First District School in 1972 to its present location. And the following year, the Harwinton Historical Society restored this one-room school.

Let’s dig deeper into the story of Harwinton and its First District School and read on as we start our trip to Harwinton’s memory lane!

History of Harwinton and its First District School

Harwinton, a town in Litchfield’s county, has 5,508 residents and is the 125th most populous of Connecticut’s 169 municipalities. The name of the town comes from a combination of the words “Hartford” and “Windsor” and the ending “-ton.”

Harwinton was not an official town back then; it was divided into two sections: East Harwinton, owned by Hartford, a town in Connecticut, and West Harwinton, which Windsor, CT, owned. But in 1737, a general assembly was held, and the declaration of the single township of Harwinton was approved during this first-ever town meeting. And once known as Hartford’s town and Windsor’s town, the 32-square-mile territory was renamed “Harwinton.”

Originally, Harwinton’s education system was conducted in people’s houses. But in 1741, a town meeting was held where the residents voted that tax would be levied to fund the construction of Harwinton’s schools.

And with the efforts of Harwinton’s town officials and residents, the first school was built in 1747. The improvement in their education was evident as they set aside a particular fund to hire educators. The educator’s priority was to teach students about high moral standards,  legible handwriting, and literature.

Education development in Harwinton continued, as they built the one-room First District (Center) School at the bottom of the hill on route 4 in Harwinton, Connecticut, in 1840, and 12 more schools until 1874.

Children typically started school at age four, learning the alphabet and beginning reading even though it was not required. Geography was the first subject covered in school at the age of seven, then handwriting around the age of nine, then arithmetic and more advanced reading between the ages of 10 and 12. On the other hand, secondary school pupils studied history and grammar.

Classes typically operate from 9 am to 12 pm, with a lunch break, and they resume classes from 1 pm to 4 pm. Most students walked to and from school, and many took their lunch breaks home. Daily school routines sometimes included readings and prayers from the Bible, as well as penmanship lessons. However, it’s not always a hundred percent attendance; there were times when students had to stay home to help with household tasks (like planting and harvesting).

Center School (First District School) was not one of those schools. In 1924, only Center School and one other Harwinton school had furnace heat, while the other schools relied on wood burners.

When the firewood was supplied, the older boys split it, and the students helped transport the wood to the basement. One student was given twenty-five cents each week to tend the fire and remove the ashes when necessary. The older student, known as “the fireman,” needed to arrive earlier than his classmates at 7 a.m. to start the fire so that the room would be warm by 9 a.m.

The only school with running water was Center School. In the mid-1920s, Newman Hungerford, a well-known donor to the Connecticut Historical Society, helped install the water system as a tribute to his wife, Helen Wilson. The latter had taught at the Harwinton school before they got married. The water flowed down from Center Hill’s peak.

In 1930, Center School was relocated to the bottom of Center Hill, next to Lead Mine Brook (South side of Route 4). It took the place of the first school building on the town green. It boasted some modifications that the students thought were special. There were large arched windows on the wall, shingles outside, and a furnace in the cellar. Unlike most schools, which were heated by pot-belly stoves, the furnace had a register on the floor through which warm air was distributed to keep the building warm.

In 1932, Center School was the first school in the district to have electricity. The municipality didn’t pay for the improvement; instead, students raised the needed $100 for the installation through a series of stage performances. The ceiling’s centerpiece globe light was a source of great student pride.

Students also bought a portable radio with the money they contributed to listen to radio programs during their vacant period. And as time passed and people became accustomed to more comforts at home, the same should be reflected in their schools.

From a One-room School to Harwinton Consolidated School

Road and transportation developments led to a direction in 1941 for the school board to replace the one-room schools with an integrated school campus.

In 1945, locals decided to buy the land between Scoville Hill and Litchfield Roads as a proposed site for the new central consolidated school. However, seepage testing was conducted after purchasing the site, revealing potential waste disposal issues. They then decided to sell the property. And a new site on Litchfield Road, where the school now stands, was purchased following a series of town meetings and discussions about the site’s suitability.

Nobody knew what would happen to First District School (Center School) not until the Harwinton Historical Society (HHS) stepped in. In 1972, with the efforts of the Harwinton Lions Club, the building that used to be First District School was moved to where it is now, on the property of Regional School District 10 (115 Litchfield Road). And in 1973, HHS restored the building to make it look like it did in 1840, a simple yet classy architecture.

The restoration of First District School in Harwinton, CT, helps us learn about the past. They are physical reminders of what people did before us and help give a neighborhood a sense of culture. Historic buildings, like this one-room school, give us a way to learn about the past and understand the people who utilized the building back then.

Old buildings have unique features that can be hard to find in modern structures. One might be able to make a new building look like the old one, but it won’t feel the same if you don’t use the same building methods and materials.

Another thing about historical restoration is that it gives people a sense of place and a connection to their city’s history through the town’s historic buildings, which witness the city’s aesthetic and cultural heritage. And others who live in a town or people who are just visiting may associate a historic structure with something well-known or significant.

Congress passed the National Historic Preservation Act in 1966 because they knew how important old buildings were to the public and the country’s history. This act helps to save historic buildings. The act states that it is in the public interest to preserve this irreplaceable heritage so that future generations can continue to enjoy its essential cultural, educational, aesthetic, inspirational, economic, and energy benefits.

This year 2022, Mitchell Restoration completed the restoration of this historic schoolhouse by making significant repairs to the building’s interior and exterior. They restored the roof’s structure while ensuring its integrity was not compromised. They installed cedar roof shingles for more effective insulation and resistance to outside elements like strong winds and heavy snow. They also applied a new coat of paint to the entire structure for added protection and to freshen up its curb appeal.

Look at the photo of the First District School in 1840 and its most recent photo after the restoration from Mitchell’s. 1840 seems like yesterday, right? This is an illustration of what a historical restoration should be.

Mitchell Restoration understands the importance of historical buildings in Harwinton, CT. They also know that the historical restoration and preservation job is not an easy undertaking, so they take every precaution in every process, giving their TLC and meticulous attention to details. Mitchell Restoration utilizing high-quality materials in this project and their unrivaled expertise in the field resulted in a stunning finished product.

Mitchell Restoration has been Connecticut’s go-to general contracting company recognized for its specialized services in the historic preservation and restoration of historic homes and institutions.

If you need work done on a historic property or building, look no further than Mitchell Restoration, LLC’s highly regarded team of restoration specialists. They’ll work with you and give you access to the best historical restoration team on this side of the Connecticut River. Call them today for a free consultation and a no-cost initial appointment!

Does your Home Need Roof Ventilation?